The sequence for the cylinders goes from side to side, beginning on the #1 cylinder and going all the way to the back of the engine. The bank cylinders on the left side of the V6 or V8 engine will be odd-numbered, while the other side will be even-numbered. This also applies to the traverse V6-mounted Chevy vehicles. 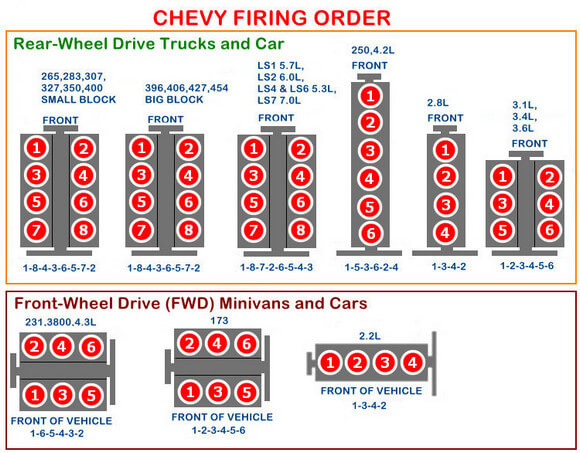 NOTE: The firing sequences above are usually typical for crankshaft with standard cross-plane design with the positioning of the throws are spaced 90 degrees apart.

The firing sequence can be altered by users, especially on cars with special racing camshafts. On V8 engines with Small Block and Big Block design, the firing order can be altered by changing the order of cylinders 4 and 7. As a result, the new order will be 1-8-7-3-6-5-4-2. This alteration can actually improve the air/fuel distribution, especially cylinders that are recently changed. The result from this is that the engine will be more effective in reducing heat buildup and the engine can be easier to tune. Drivers might also notice reduced vibrations and torsional loads.

The firing order is typically the same for the Chevy V8 marine engine built with a standard rotation design. A reverse direction might be found on boats that feature twin inboard engines, which is used to offset the opposite engine’s rotational effects. This mechanism will help the boat to get more stable. This type of engine will also feature a special marine camshaft that can change the timing for the valve, which will rotate in a different direction. It is necessary to get the firing order in a correct sequence because the engine might have difficulty starting if the spark plug wires get mixed up. The engine could also experience backfiring, and the performance would get worse than normal.

Watch Out for Ignition Crossfire

Crossfire can also happen on engines that feature a design where two adjacent spark plugs are located next to each other. You will need to make sure that the wires are not routed on those spark plugs, especially for long-distance connections. The crossfire between those plugs will create a magnetic field, which may also cause one of the plugs to fire prematurely. The engine will run rough, and misfiring will occur. You can cancel out the possibility of crossfire by using a crisscross design for the adjacent spark plugs wires.

If you have engines built with ignition systems that have no distributor, the firing sequence is usually determined by the engine computer or the ignition module. The engine computer will process a signal sent by the camshaft or crankshaft position sensor, and it will determine the right piston on the top dead center location of the compression stroke. The spark plug firing order will be then activated, which fires the plugs from the first to the last one.