FINDING THE CAUSE OF A STEADY OR CONTINUOUS MISFIRE

The first step to do in diagnosing the steady misfire problem is to isolate the misfiring cylinder. While the engine is idle, one at a time disconnect each of the spark plug wires temporarily, this is an old-fashioned way to find a weak cylinder, although this is an old-fashioned way but sometimes it working. The weak cylinder has been pinpointed if there is no change in the idle speed.

The coil’s high voltage surge can’t follow it is normal path into ground through spark plug and the plug wire, and will pass through the coil when the plug wire is disconnected physically from the spark plug. Not on a prolonged basis, if only holding back such voltage backup intermittently most of the ignition system is strong enough to do it. A weak ignition or coil module, will push the component over the brink that caused it to fail.

On DSO (digital storage oscilloscope) or an ignition scope, a weak cylinder will stick out like a sore thumb. The firing voltage for each cylinder can be revealed by a secondary parade pattern. The first on the screen is the cylinder number one, in their firing respective order, the other cylinders will follow, from left to right move across the screen.

An indication of a problem is if the peak firing voltage for each cylinder is significantly lower or higher than the other. An mostly low firing voltage will let you know the spark is finding out a shortcut into the ground. The most likely that caused it is a shorted plug wire, cracked, spark plug that fouled or shorted, arcing past the boot’s spark plug to ground. It will tell you that that the plug wire is open, too badly worn or too wide the spark plug electrode if the firing voltage inside the cylinder is unusually high.

If engine idling equal with the firing voltages for all the cylinders, misfire that occurs when the engine is under load can be diagnosed by a snap-kV test. How to test it, observe the pattern of firing in the scope while you suddenly open the throttle wide and then let it fall back. When the snap-kV acceleration test running, all firing voltages must increase, an indication of a problem exist if individual cylinders increase significantly more or less than its companions. The high resistance indication at secondary ignition of the affected cylinder is if the voltage spike of snap-kV that higher than the other. Open in the plug wire or checking on excessive resistance. It indicates a loss of voltage if the spike that is much shorter than the rest. Check the shorted plug wire, the boot’s spark plug that across an arcing or shorted, cracked or damaged spark plug. The available low voltages on the coil can be identified during snap-kV test and there low overall spike heights accompanied with misfire under load. In this case, the faulty ignition coil is the mostly cause this occurs. Also, another factor like low battery voltage can be the cause. Make sure you are checking charging voltage and the battery.

The primary pattern for the suspicious cylinder is the next thing you should checking out. The additional pieces in the diagnostic puzzle can be revealed in the primary pattern. When the coil starts to charge, it will show the primary pattern, coil oscillations and the “spark burn line”, “arc-over” or the peak firing voltage (a high low has been determined and you have seen it). 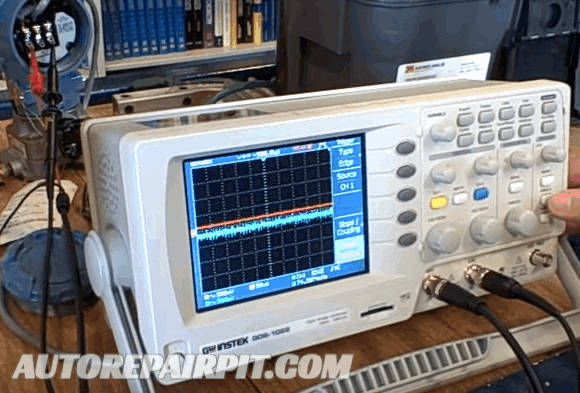 A leaky intake manifold gasket, plugged or inoperative fuel injector, a EGR valve that leak (if the cylinder intake port is adjacent to the valve.), or air leakage past injector O-rings can cause lean mixture on single cylinder. In the same way, the spark burn line can be affected by a leaky head gasket or Loss of compression because of a leaky (burned) exhaust valve.

NOTE: If the lean fuel mixture is shown by looking at the height of the spark burn line that are higher than normal, there is something that affects all the cylinders that could be the main cause it occur, just like low fuel pressure (bad pressure regulator or weak fuel pump), leaky EGR valve, leaky vacuum hose, or intake manifold vacuum leak.

If the fuel injector leaks, in an individual cylinder can occur (less common) a rich fuel mixture. Rich condition in all cylinders most commonly caused by the injector that get to much pressure due to faulty fuel pressure regulator, coolant sensor or a dead oxygen sensor which preventing the computer into a closed loop.

The amount of “hash” it contains is something else to look at in the spark burn line. If there show a relatively clean line with little hash, it mean the cylinders is good. When lean misfire are present or ignition misfire occur, it has a lot of hash. What happen on inside the cylinder can be shown by length or duration of the spark burn line. If burn line has 2 ms (milliseconds) duration or more, for any reason given the air/fuel mix runs abnormally. The cylinder will running too lean if the duration of the burn line is 0/75 ms (milliseconds) or less.

In the primary ignition pattern, the coil oscillations is you want to see and to check it. If after burn line and the coil is good, there at least two and preferably three or more oscillations. Faulty coil would be indicated with fewer oscillations.

When Your Engine Car Won’t Start Or Crank, What Would You Do

Have you ever experienced with an car overheating (engine overheating)? 195 to 220 degrees Fahrenheit …