How The Low Oil Pressure Light Comes On And Off

Checking first the oil level to determine if it low or full by take look on the dipstick.

Low oil level and oil consumption in engine most likely caused by oil leaks. It occur at timing cover gaskets or oil pan, the rear and front the seals of crankshaft oil, or the valve cover. For signs of oil leakage, check the bottom, sides and top of the engine. The check can be started by looking for heavy accumulations of grease, oil dripping or greasy stains on the ground. More miles on engine, the big chances have a leaking problem with gaskets and seals. If gaskets and seals causing engine leaking oil, you need to replace the gaskets and seals.

If the oil level is low and no oil leak was found and the outside of the engine is clean, probably valve guides, valve guide seals, or worn piston rings that causing the engine burning the oil. high mileage wear or neglect could be the reason it occur. It will be expensive to fix due replacing or rebuilding the engine is the way to fix oil consumption problem.

NOTE: In the engine’s oil pan, there’s an oil level sensor that can causing oil warning light turn on when the level of oil is low (occur on some engines only). The engine could burning the oil, leaking oil or both, if the dipstick indicates a low oil level (you don’t see an oil on dipstick or level of oil below or at ADD line).
NOTE: On some engines, if the original seals and guides are worn, the way to fix oil burning problem (reducing oil burning) you need to replace the valve guide seals.

Bad oil pump can causing engine running with noises, check the oil level between ADD and FULL. Until the problem can be repaired, DO NOT run the engine. The way to checking oil pressure can be done by attaching the pressure gauge into the engine where unit of the oil pressure sending is attached. If the oil pressure measure results reads per 10 psi per 1000 RPM (normal specifications), it mean the oil pump is good. However if the result is not within specifications (less than from normal), it tell the engine bearings might be worn or could be the oil pump is worn. 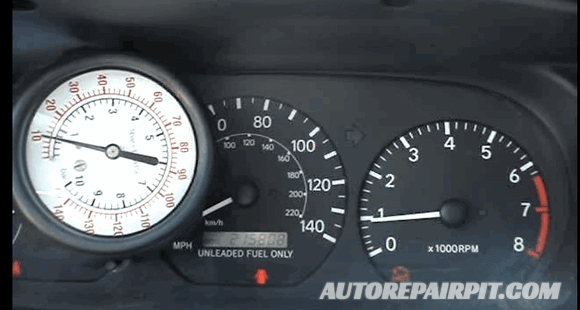 After the warning from oil pressure light came on, the level of oil is between “full” and “add”, and when the engine run normally there are no noises come out, you can suspect the problem could be oil the pressure gauge, warning light switch or a defective oil pressure sending unit. Try to start the engine and drive the vehicles, however STOP driving and shut off the engine if the engine starts to become noisy.

Here are some ways how to fix low oil pressure problem. There is an easy way and a medium level task that requires testing tools to determine the source of the problem.

Add Oil To The Engine

Bring the level up the oil to the FULL mark on the dipstick by adding oil to the engine if the oil level is low. Never overfill the crankcase. Refer to owners manual and only use the appropriate oil viscosity specified type.

If worn engine bearings that causing oil pressure is low, then you need to replace the crankshaft bearings. And most case like this requires replacing or overhauling the engine.