Most Read Tips
Home / Car Resources / Toyota Highlander Years That Should Be Avoided: Avoid Buying the 2015 and 2003 Models

Toyota Highlander Years That Should Be Avoided: Avoid Buying the 2015 and 2003 Models

Gathered from the data that we have received over the years; we can now conclude that buyers should avoid buying Toyota Highlander with the 2003 and 2015 model years. These model years are some of the most complained models from the users who have reported a high number of problems on their vehicles. You do not want to spend a lot of money to fix all those problems.

Toyota Highlander is one of the most popular models from this manufacturer that attracts a lot of customers over time. A lot of users buy the new models of Highlander when it comes out every year. This is because the SUV has a complete list of safety features and other additional options that a lot of people want for their vehicles.

The Highlander is very good in most aspects, but the vehicle still has its own drawbacks especially on some model years compared to other years. Normally, most years will be better than others and will not have a high number of reported claims as the bad model years.

If you have come to this article, then we will give you information about the model years of Toyota Highlander that you should avoid buying. We will give you the most reported problems along with the expected repair cost for each problem. You will also know the expected usage time of the vehicle before a problem occurs.

The Most Common Model Years of Toyota Highlander to Avoid

A full analysis of the complaint report from the customers has told us that the model years to avoid are Toyota Highlander 2003 and 2015. The 2003 model is submitted to the list due to the fact that the problems will require a very expensive repair fee to fix, even though the number of reported complaints is relatively low. Meanwhile, the 2015 model year is included in the list because it received the highest number of complaints from the occurrence of engine problems.

According to the customer’s report, the 2015 Toyota Highlander has the worst features in the comfort of its seats. While the vehicle is advertised to have amazing modern features, the seats are very uncomfortable and not suitable for long periods of driving.

Some customers reported an intense feeling of pain after driving the vehicle for a mere 15 minutes. Others have reported that they experienced back and shoulder pain due to the uncomfortable design of the seats. Aside from those problems, the material of seats is made from low-quality material that fades and disintegrates quicker compared to seats on other vehicles.

Another problem from the 2015 Toyota Highlander is the loud wind noise when the vehicle is being driven. The noise problem does not only happen when the vehicle is being driven at a high speed, but it occurs when the speed is just a little bit higher than 25 mph. The possible cause for this loud noise is the unsuitable rearview mirror design that comes in a much bigger size compared to other vehicles.

A lot of users have reported that the 2003 Toyota Highlander experienced a frequent engine failure during the usage. They also reported that the oil usage on the vehicle feels a lot more excessive compared to other vehicles. Those problems can cause a significant repair fee that can sometimes reach about $5000. The engine on this vehicle can overheat very quickly due to the problems with the coolant leaks that are driven by the failures on the engine. Some owners have said that they have to pay about $15,000 just to replace the old motor with a new one.

The Common Problems of the Toyota Highlander

While the problems that can occur on Toyota Highlander might vary for each owner, there are some common problems that happen more than the others.

Toyota Highlander Engine Problems
Toyota Highlander has a high chance of experiencing stripped condition on the engine bolts. Even though a lot of other causes can be behind the possibility of engine failure, the stripped engine bolts are usually the main culprit for the failure. When this happens, the owner will be required to replace the entire engine because it will not be able to work properly. Another issue that might occur on this vehicle is the fuel line problems that happen frequently on Toyota Highlander. The fuel lines can get ruptured suddenly without the system giving any warning signs. This can also cause significant engine failure in both 2015 and 2003 Toyota Highlander models.

A lack of oil in the engine can also occur for the Toyota Highlander. But this problem is considered light compared to the other issues since the owner can simply clean the lines to resolve the issues. This will also resolve any problems regarding the other components that are related to the fuel lines. Owners might need to check for this issue as soon as possible before the problems can arise. You might need to replace the entire engine if this problem is not resolved soon enough.

Toyota Highlander Transmission Problems
A lot of owners also reported a frequent problem with the transmission mechanism of Toyota Highlander. This problem occurs a lot more on the 2015 model. The complaint is important because it can happen even on newer vehicles with only 1000 miles of travel. While the problem can be fixed by mechanics, most owners reported that they have to replace the whole component to get the transmission to work properly again. The only good news about this issue is that your vehicle will be likely within the period of warranty so that you can get the transmission replaced without having to pay a lot of money.

Toyota Highlander Body Problems
As we have mentioned before, the loud noise from the rear-view mirror is a big issue for many owners. This is due to the incorrect body size of the mirror compared to the body of the Toyota Highlander. Meanwhile, some people also say that the power lift-gate is experiencing problems when it can’t open for no apparent reason.

Another minor problem with the vehicle is the smell problem that can happen even in a brand-new car. A user complained that their new Toyota Highlander smelled like mold. But you will not need to worry since this problem is only reported rarely.

Toyota Highlander Windows Problem
At least a number of complaints mentioned that the Toyota Highlander has a problem with the windows. The users state that their windows cannot be open after using the vehicle for more than 6000 miles.

At 6000 miles of travel, a vehicle should still be considered brand-new especially considering the high cost it requires the purchase. While this is considered a minor problem on the vehicle, it will still be enough to discourage people from buying Toyota Highlander, especially the 2015 model.

Make sure that you already familiarize yourself with the user complaints regarding the recalls of this particular model of vehicle before making a decision to purchase a used Toyota Highlander. By doing this, you can avoid buying a vehicle that has a known issue and has not been resolved by the manufacturer. Looking at history, very few recalls have been made regarding the problems on the Toyota Highlander, especially for the significant complaints on the 2015 model. The only recall was given out on May 7, 2015. This is when the manufacturer tried to address the problems that happened on the steering system. While the steering system is not included in the most reported problem on the vehicle, the manufacturer tried to resolve this issue because this is very crucial for the safety of the 2015 Toyota Highlander owners.

In a similar fashion, the 2003 Toyota Highlander also has not had a lot of recalls even though a lot of owners reported problems with the mechanical system. The company has only issued recalls to resolve the problems with the lug nuts of the spare tire.

The Life Expectancy of a Toyota Highlander

The recent analysis states that the life expectancy of Toyota Highlander should last for about 300,000 miles of travel or about 20 years of usage. This life expectancy is comparable to other vehicles and the owners should be very satisfied with this model.

But life expectancy will always depend on how the owners use their vehicle and how they drive it. It will also be affected by the amount of care that is being put into the vehicle. Toyota Highlander that gets routine inspections and maintenance will likely have a higher life expectancy compared to the vehicles that have infrequent maintenance.

If the owners want to make sure that their Toyota Highlander can reach 300,000 miles in its lifetime, they will have to make sure that they can maintain a routine schedule for repair and inspection. This can be a good way to take care of any problems that might occur on the vehicle before it gets more complicated and more expensive to fix.

After we discuss the model years that you should avoid from the Toyota Highlander, we will also list some models of this vehicle that you should choose if you want to buy it.

While the model years of 2003 and 2015 are not very appealing compared to other models, there are still many Toyota Highlander models that will give you the best user experience if you want to get them. But if you still want to get the best and most modern Toyota Highlander, you might want to choose the 2017 or 2018 model. Not only have they received a low number of complaints in the past years, but the vehicle also looks better compared to other model years. Some minor issues might arise regarding the engine, the fuel system, and the brakes. But those issues are pretty easy to resolve.

But a good practice when you want to buy a used Toyota Highlander is to always bring a professional mechanic to perform an inspection before making a purchase decision. They can look at the vehicle in detail to make sure that it does not have any serious problems. The mechanic can also help you in detecting some hidden problems that might not be obvious from the outside.

The Most Reliable Model Years of Toyota Highlander

If you want to get the most reliable model of Toyota Highlander, we recommend that you get 2007, 2017, or 2018 model years. Some experts also recommend choosing the model years between 2006 and 2007 to get you more reliable years from your used vehicle.

Many amazing features are featured on the Toyota Highlander which makes it the most popular SUV on the road today. But between those amazing features, you will need to look for the common problems that might arise from the usage and avoid the model years that have the most problems.

From the statistics, we can say that the 2003 and 2015 model years are the ones that you should avoid if you want to buy a used Toyota Highlander.

And if you already have a Toyota Highlander in your garage and the vehicle is experiencing a major issue, you might be better off selling the vehicle before the issue gets too costly to repair. 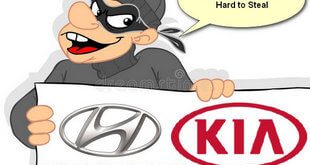 The Insurer Says Hyundai and Kia Cars Too Easy To Steal Future of Driving with Mercedes Drive Pilot in the U.S. S-Class